An impressive reporting week with strong upward pressure is behind us. The week was defined by ever-higher daily closing prices until the end of the week. The lowest point was reached on Monday at $15.870 and the highest on Saturday at $19.010. This resulted in a substantial weekly increase of almost 20%. Only on Sunday did a correction set in, which was, however, used again in the course of the day for buying opportunities. But one after the other: We look back on a 6-day series with higher daily lows and daily highs. As early as Monday, a new annual high was created with a daily closing price of $16.720. The upward trend continued on Tuesday with an impressive 6% price gain. On Wednesday and Thursday, the market took advantage of a brief consolidation in the $17.750 range. On Friday, another impressive green candle was created with a renewed uptrend of almost 5%. The reaching of a new annual high on Saturday at $19.000 led to a price correction on Sunday, which took Bitcoin to a daily low of $17.600. In the course of the day, new buy orders brought the price back to around $18.500.

A breakout through $14.000 leads to a parabolic surge 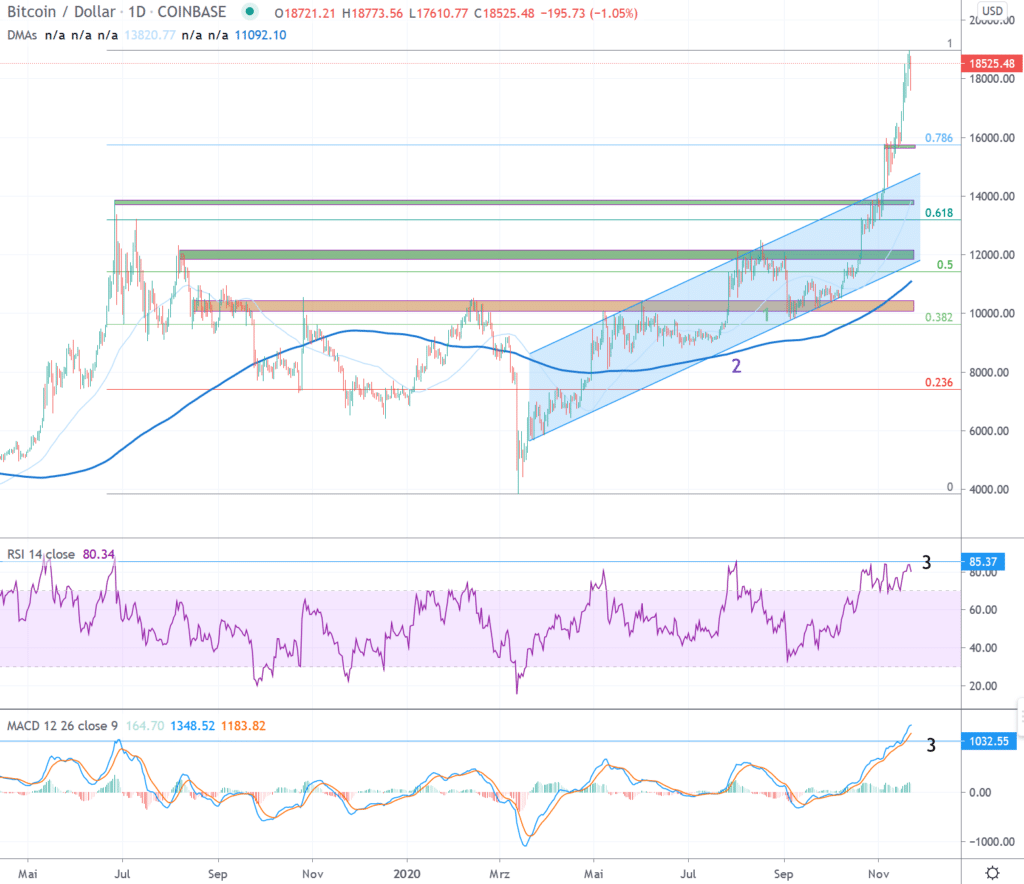 A veritable countermovement established itself after the price slump in mid-March. This led up to the resistance zones starting at $10.000. After a renewed rejection at the beginning of June, an almost two-month consolidation was observed. This was characterized by a series of higher daily lows and lower daily highs. The series of lower highs was broken on 22 July. This was followed on July 27 by a breakthrough in the resistance zone around $10.500, which has been established since August 2019 and which Bitcoin has already failed to break several times. The resistance zone around $10.000 was interesting in several respects. On the one hand, the 0.618 Fibonacci points (1) of the entire downward movement, which was heralded at the end of June 2019 just below $14.000, is located here. On the other hand, the zone around $10.000 also served as a confirmation of the still bearish trend of lower highs since December 2017 (see next section). This zone now counts as significant support (green). Since the end of July, Bitcoin has been able to establish itself above the newly created support in the $10.000 range. This support was confirmed by a re-test in early September and has since then served as the beginning and an important pillar of the recent positive trend. Since then, further significant resistance zones have been overcome. On October 21, for example, the resistance zone around $12.200 was breached, which became established as early as January 2018 and has served as the zenith for the Bitcoin price on several occasions since then (see macro outlook). In the following weeks, the positive trend intensified and led Bitcoin through the last visible resistance before the all-time high of around $14.000.

With $14.000, an important resistance, which opposed a “clear sky” scenario up to the all-time high, was overcome. This is an impressive act of strength and first-class proof that the market is serious about the trend reversal that has been initiated this year. The breakthrough was reinforced by the simultaneous break of the upper trend line of the trend channel that has been forming since March (light blue). This led to a strong accentuation of the uptrend in the last 3 weeks, which is now beginning to take on a parabolic shape. In parabolic price appreciation phases, it becomes increasingly difficult to define probabilities for short-term price targets on the basis of technical indicators, as consolidation phases are missing. Reaching the all-time high of $20.000 seems to be as likely as a correction into the first support zone below the $16.000 mark. Last week’s price movements have created a foundation that is necessary to reach or even exceed the highs of 2017 again. However, in order to reach higher price targets, a sustainable movement is necessary. In order for this to succeed, the recently overcome resistances should be respected as support in the coming weeks (green). The current strong upward movement comes from the overbought territory on the RSI and MACD indicators (3). Accordingly, setbacks should find support around the first support zones at $16.000 and above the $14.000 mark. Basic support has formed around $12.000. Serving as resistance since August 2019, the lower trendline of the channel (blue), which has been established since March 2020, is also located in this support area. The 200-day moving average (2) is also moving into this zone. 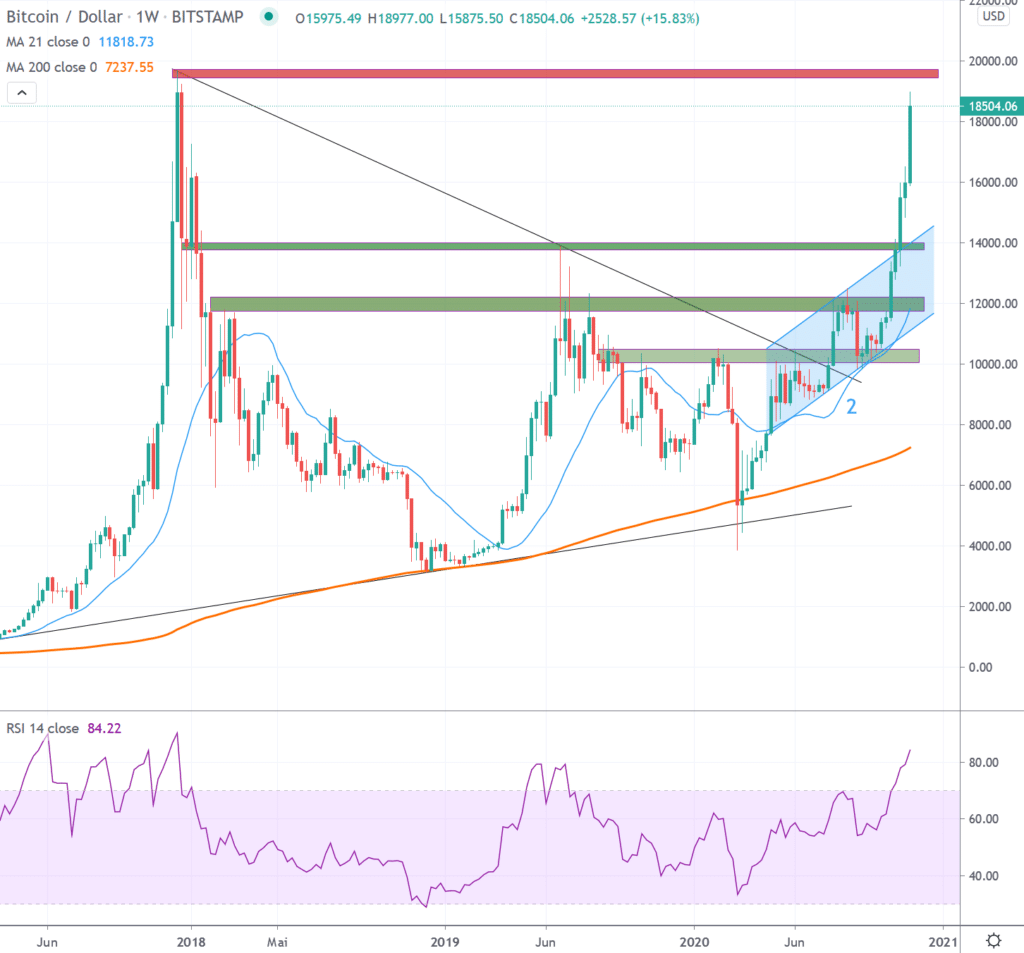 In 2020, Bitcoin was able to set a higher weekly high above $10.000 for the first time, breaking the prevailing bearish trend since December 2017. This broke the series of lower highs that had lasted for 135 weeks. Since the breakthrough of the bearish trend, the signs of a valid trend reversal have become stronger. With the breach through important resistance zones and a continuous trend above the 21-week average (2), the probability of reaching the all-time high created in 2017/18 increased. Last week’s price movements created a good foundation. In order to reach new levels above the all-time high, sustainable respect for the newly created supports (green) over the next weeks/months is necessary.

Risk Warning
Investments, especially in cryptocurrencies, are generally associated with risk. The total loss of the invested capital cannot be ruled out. Cryptocurrencies are very volatile and can therefore be exposed to extreme exchange rate fluctuations in a short time.