Bitcoin, after consolidating in the USD 15,500 range, was able to make a renewed breakout into higher spheres and further extend its price increase of the previous week. On Monday, a second attempt to break through the USD 16,000 mark after the doji of November 16 failed. This was followed on Tuesday by a consolidation in tight trading ranges around the USD 15,300 mark. On Wednesday, a second attempt to break through the USD 16,000 mark was rejected. However, the daily closing price of USD 15,706 proved to be the highest in the current year. This was enough for the bulls to break through the USD 16,000 mark on Thursday and, with a daily closing price of just under USD 16,300, to mark a new weekly and annual high. On Friday, prices of USD 16,500 were registered for a short time. However, the level could not be maintained and led to a closing price just below the price range reached during the course of the day. The weekend was marked by levies, which took Bitcoin back to around USD 15,800 by the end of the week. 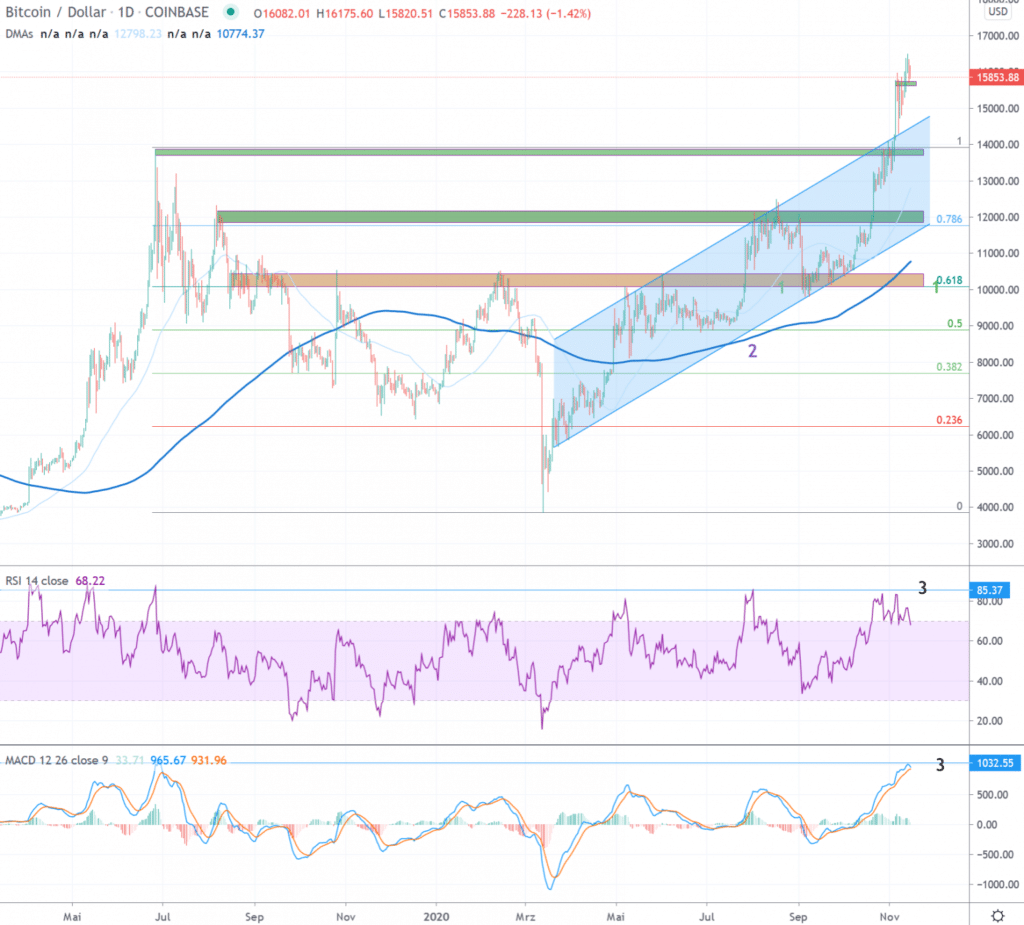 A veritable countermovement established itself after the price slump in mid-March. This led up to the resistance zones starting at USD 10,000. After a renewed rejection at the beginning of June, an almost two-month consolidation was observed. This was characterized by a series of higher daily lows and lower daily highs. The series of lower highs was broken on 22 July. This was followed on July 27 by a break through the resistance zone around USD 10,500, which has been established since August 2019 and which Bitcoin has already failed to break several times.

The resistance zone around USD 10,000 was interesting in several respects. On the one hand, the 0.618 Fibonacci point (1) of the entire downward movement, which was heralded at the end of June 2019 just below USD 14,000, is located here. On the other hand, the zone around $10,000 also served as a confirmation of the still bearish trend of lower highs since December 2017 (see next section). This zone now counts as a significant support (green).

Since the end of July, Bitcoin has been able to establish itself above the newly created support in the USD 10,000 range. This support was confirmed by a re-test in early September and has since then served as the beginning and important pillar of the recent positive trend. Since then, further significant resistance zones have been overcome. On October 21, for example, the resistance zone around USD 12,200 was breached, which became established as early as January 2018 and has served as the zenith for the Bitcoin price on several occasions since then (see macro outlook). In the following weeks, the positive trend intensified and led Bitcoin through the last visible resistance before the all-time high of around USD 14,000. With the breakout a breakout of the trend channel (light blue), which has been forming since March, was also achieved. Support can be expected in advance in the area of the upper trend line of the channel.

The recent rallies are strong evidence that the market is serious about the trend reversal that has been initiated this year. A final resistance, which is opposed to a “clear sky” scenario up to the all-time high, was overcome with the breakthrough of the USD 14,000 mark. Last week’s price movements have created a foundation that is needed to be able to reach the 2017 highs again. In order for this to succeed, the recently overcome resistances should now be respected as support in the coming weeks (green). The current strong upward movement comes from overbought territory on the RSI and MACD indicators (3). Setbacks should find initial support around the support zones at around USD 14,000. A fundamental support has formed at around USD 12’000. Serving as resistance since August 2019, the lower trendline of the channel (blue) that has been established since March 2020 is now also located within this support area.

Should the lower trendline be broken in case of a stronger setback, then the USD 10’000, where the 200 daily average (2) is also moving in the meantime, is seen as an indicator for the justification of the bullish trend that has been established since March. If this zone is revisited or undercut, a longer-lasting consolidation in the USD 9’000 – 11’500 range can be expected. 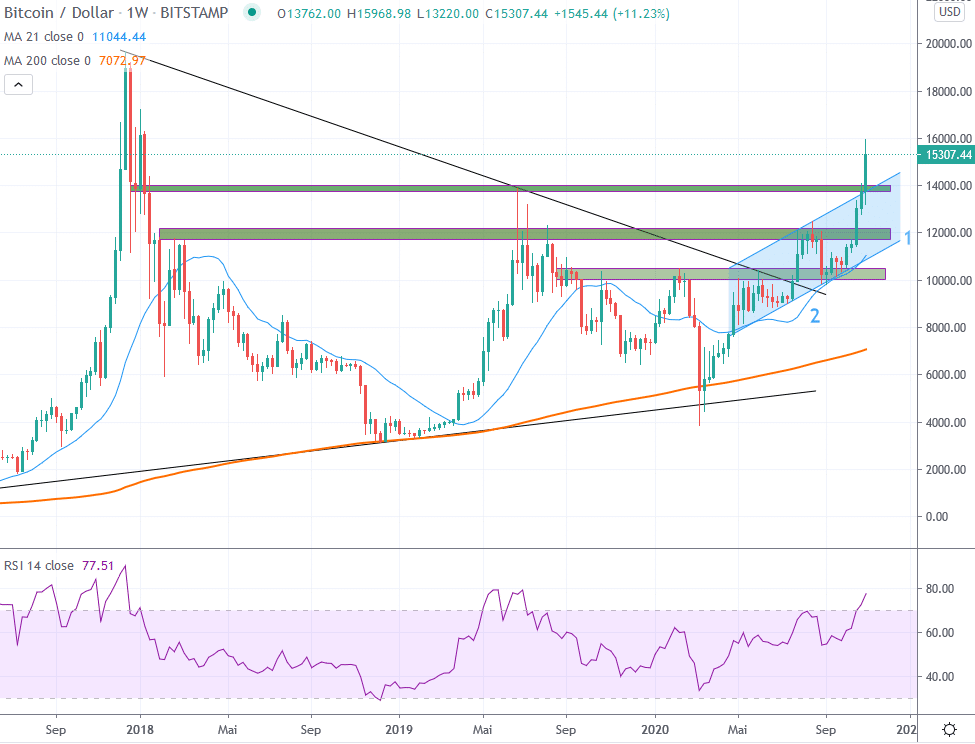 In 2020, Bitcoin was able to set a higher weekly high above USD 10’000 for the first time, breaking the prevailing bearish trend since December 2017. This marked the end of a series of lower highs over 135 weeks.
Since the breakthrough of the bearish trend, there have been increasing signs of a valid trend reversal. This can be legitimized by a continuation of the weekly candles within the establishing trend channel (1), as well as further development above the 21 week average (2).

A sustained respect for the newly created supports in the range of USD 12’000 and USD 10’500 over the next weeks/months underlines the legitimacy of the trend reversal. If these are respected, there is not much more to prevent a renewed attack on the all-time high of a good USD 20,000.

A drop in the price that would bring the price back into the areas below USD 10,000 over several weeks would damage the positive momentum and argue for a longer-lasting consolidation in this area.

InCore and inacta Enable Easy Access to Crypto-assets for Banks

Bitcoin Mining as a Business