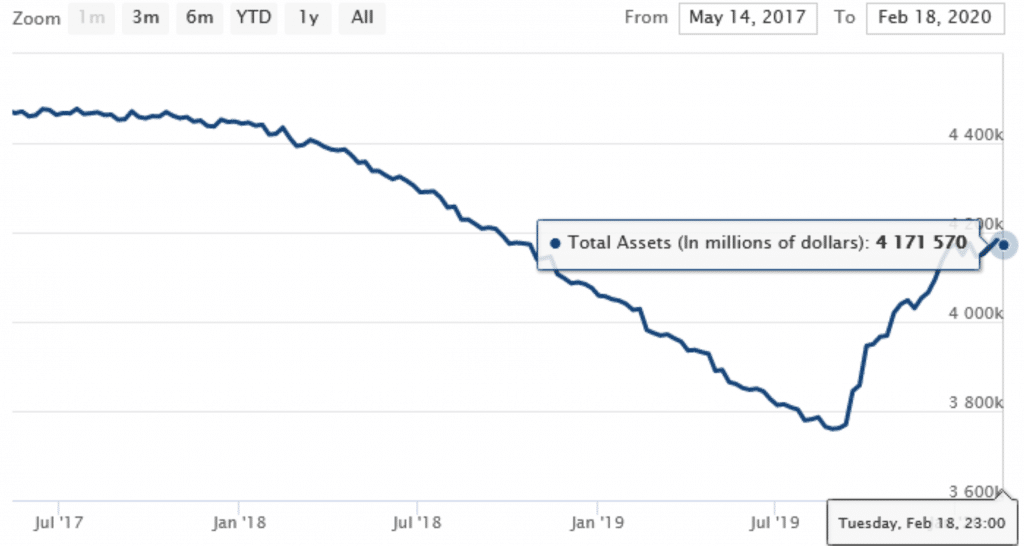 Federal Reserve Balance Sheet after a phase of “quantitative tightening”, since July 2019 there has been a steep rise in assets held, towards an all-time high of USD 4.5 trillion in 2015 Source: FederalReserve.gov

It is apparent that our currency (FIAT money), has many roles. It is reproduced at will to maintain the system. The value retention and thus the characteristics, as a store of value, are at the back of the list. Few people are aware that pure cash has suffered a dramatic devaluation over the years. The “lead currency” US dollar has lost more than 96% of its purchasing power since the Federal Reserve was established in 1914. Portfolio Strategy The shortfall risk is high, thus we must speak of individual blistering. For a historically minimal return, investors accept more risk than they might be aware of. Due to the structure of the international financial market, institutional investors are forced to make new investments. How do you protect capital in such an environment of financial markets? Apart from avoiding the bond market or generally borrowing money, options are offered by the historically low volatility. This can be helpful when used correctly. If purchased in the form of portfolio insurance, it is certainly more sensible in the current environment than selling them in the form of reverse convertibles or other similar instruments*. In addition, stocks that cannot show negative interest rates and also have a limited range of products are attractive additions to the overall portfolio context. These include precious metals such as gold and silver, but also digital currencies with limited supply, i.e. the most prominent example being bitcoin. Bitcoin as portfolio addition The still young asset class of crypto currencies, namely bitcoin, can act as an attractive addition to a traditional investment portfolio. The current application growth, as well as the exponential potential, makes this still young asset class very attractive as a portfolio addition, even if it is based on pure portfolio theory. But please do not misunderstand what is being said, this paper is not a recommendation urging the replacement of  other asset classes with bitcoin. Compared to existing asset classes, it has excellent properties that – with the right weighting – make it an almost indispensable addition to a portfolio. Here, this paper addresses the most important criterion in the selection of assets: the risk/return profile. *The report was written on 20.02., currently volatility has risen massively. * Originally published in German at CVJ.ch
Tags: Bitcoin, Crypto, Traditional Market