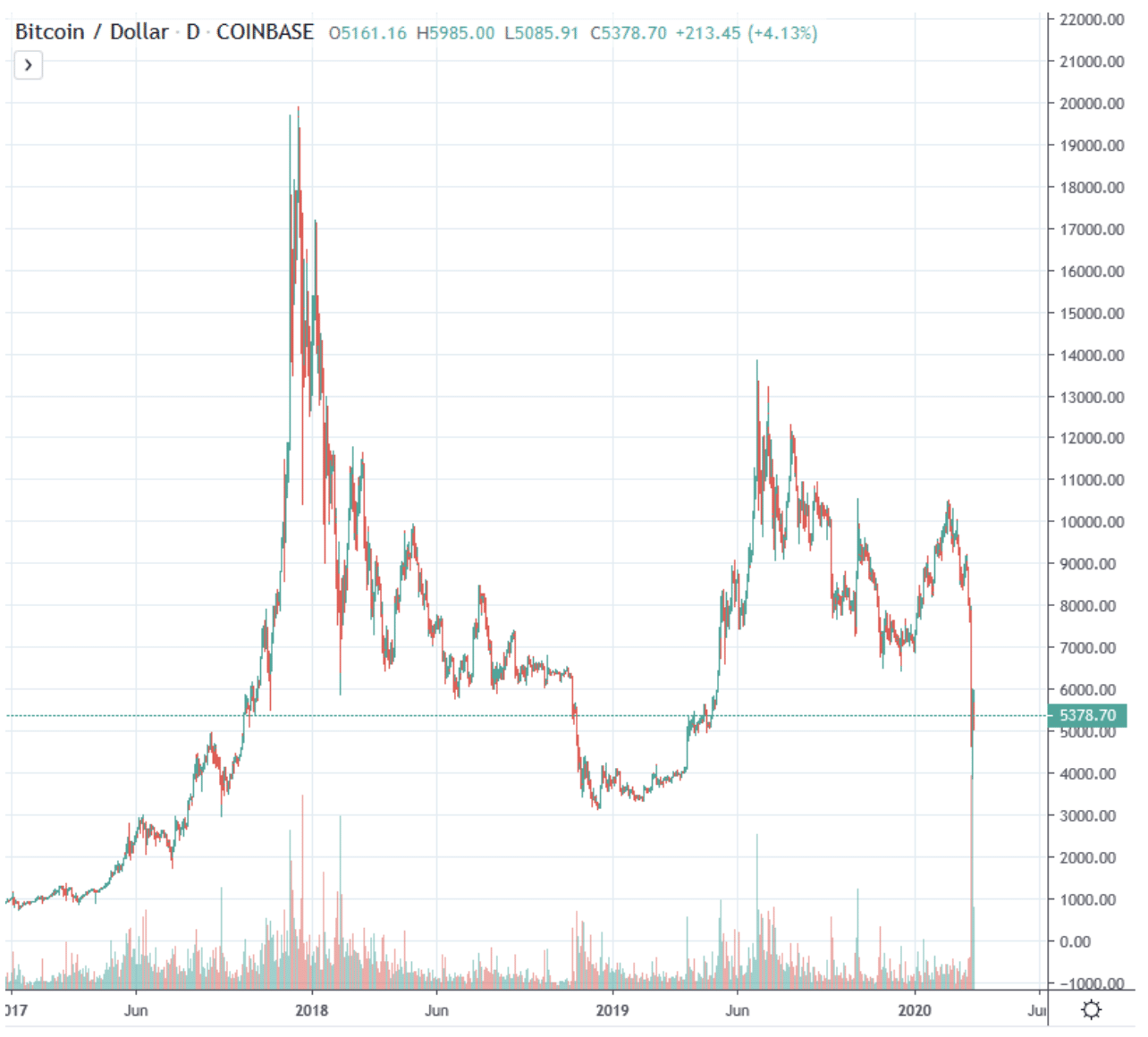 Bitcoin/USD – Black Thursday leads to the breaking of all supports At the beginning of the reporting week, the bitcoin price moved below the USD 8,000 mark —  with a tendency towards lower daily highs and lows. For the time being, it the price was held the support USD 7,700, which was established by earlier resistance zones. However, as the stock market collapsed on Thursday, bitcoin was no longer able to hold ground; as on the same day, the price plummeted to 4,600 USD. ~This rut continued on Friday, which led to prices dipping below 4’000 USD mark.  Thus, the daily closing price on Friday was at 5’600 USD level. Bitcoin then consolidated in the range between 5’000 and 5’500 USD, as the week came to a close. Is the ‘Shoulder-head-shoulder’ formation followed by a strong sell off? 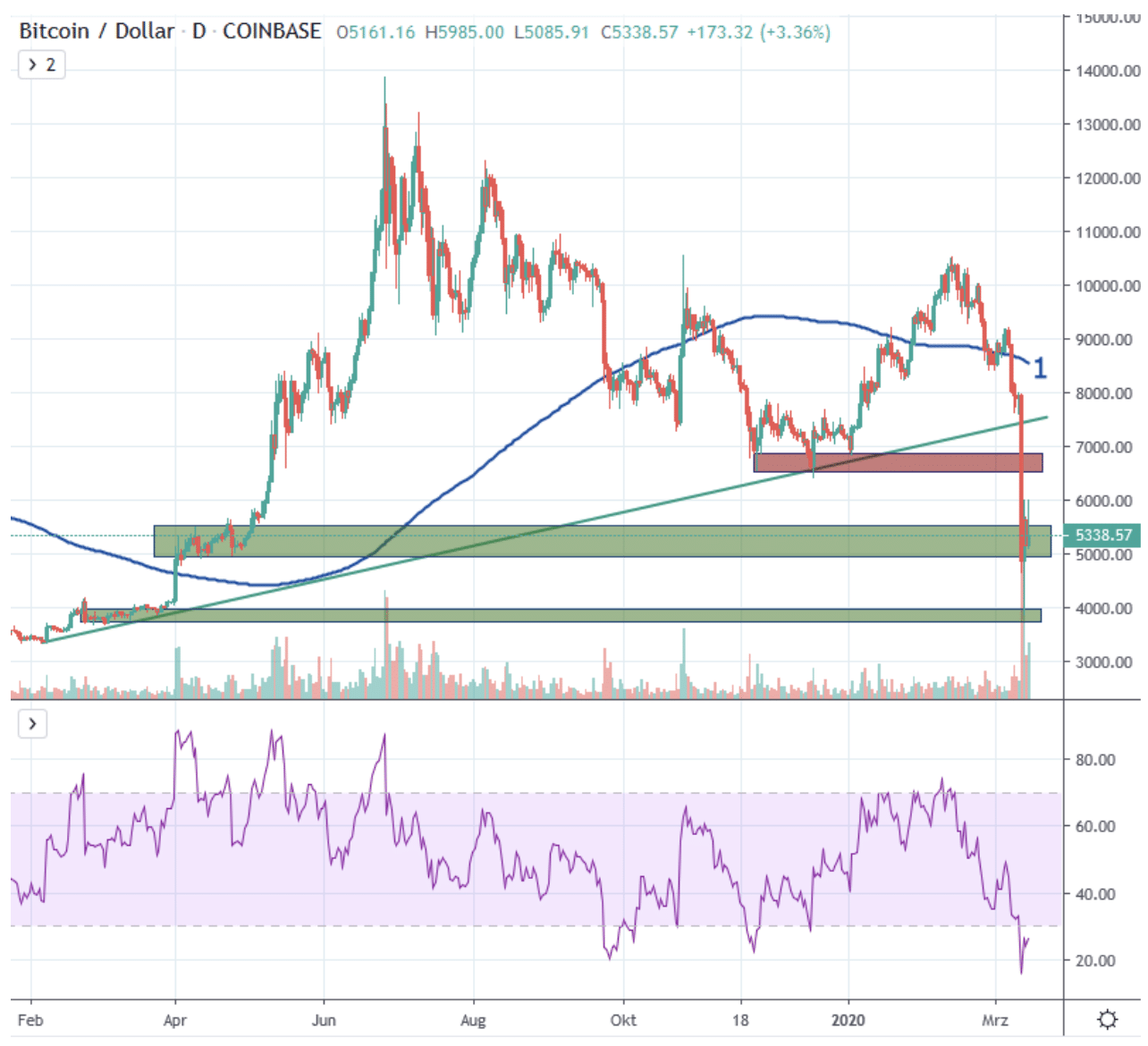 The trend of lower highs since mid-February has already indicated that a new bearish tendency is present. The use of the ‘shoulder-head-shoulder’ formation, as well as drop below the 200-day moving average (1) further strengthened the negative short-term picture last week. The collapse of the support zone between USD 7,700 and USD 8,000 was followed by a massive price fall; crashing through the  support at USD 7,000. Back in 2019, the USD 7000 support level was the result of the resistance  at USD 4,000 mark,  that stopped the fall in the short term. This was followed by a consolidation above the USD 5,000 mark, which already served as resistance between April and May 2019 and later as support. Technically, all supports that could have sustained the upward trend since the beginning of the year were breached. We are now below the USD 7,000 mark, which formed the basis for the recent uptrend at the beginning of the year. This now serves as resistance (red). Bitcoin is currently in “no man’s land” and must first find a new base. In the short term, support at USD 5,000 (green) is important so that the chances of a renewed dive towards the USD 3,000 mark do not become more probable. Resistance is located at 6’400 USD due to the bottom formation at the end of 2019. Macro: Further confirmation of lower highs since the end of 2017 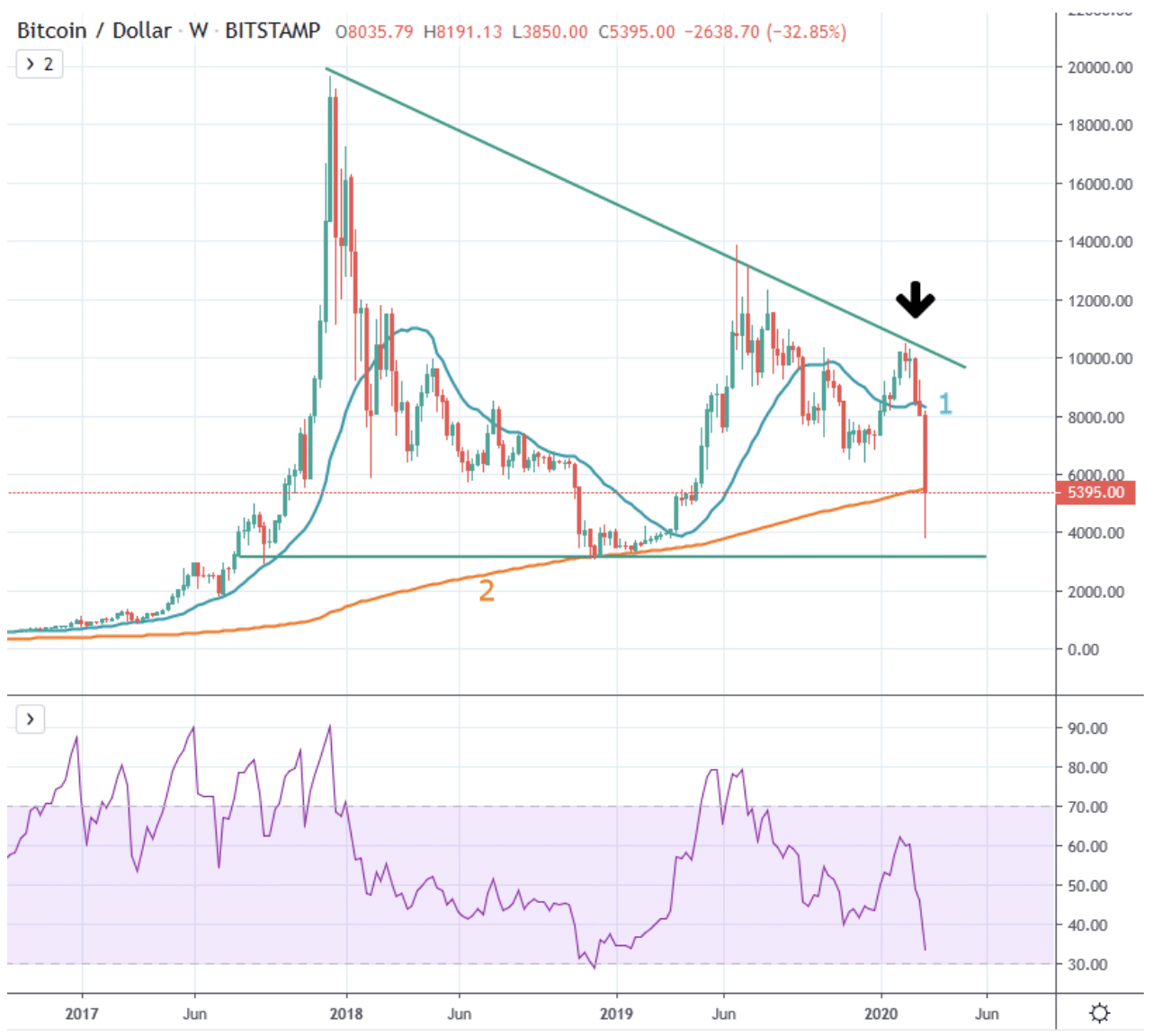 Bitcoin did not manage to set a higher high in the weekly interval, which would have broken the trend since December 2017. In its last attempt since the beginning of the year, the upward trend in the relevant zone failed at around USD 10,500. Only a break in this zone would have broken the prevailing trend (arrow). The sharp price correction that has now taken place confirmed the prevailing downward trend. Bitcoin is now below the 21-week average (1), which in the past often decided about bull markets or bear markets. Should the downward trend continue, we would also be facing a historic premiere: For the first time in its existence, the 200-week average (2) would be broken through to the bottom. In the past, this has repeatedly served as a safe support. Since December 2017, the macro picture remains dominated by lower highs in the downward trend. Bitcoin has to create a new basis. If the USD 5,000 mark does not hold, support between USD 3,000 and USD 3,500 can be expected; similar to the bottoming out of early 2018. The macro picture can still only be broken in the medium term if the trend of lower highs since 2017 is sustainably broken. Disclaimer All information in this publication is for general information purposes only. The information provided in this publication does not constitute investment advice and is not intended as such. This publication does not constitute an offer, recommendation or solicitation for an investment in any financial instrument including crypto-currencies and the like and is not intended as an offer, recommendation or solicitation. The contents contained in the publication represent the personal opinion of the respective authors and are not suitable or intended as a basis for a decision. Risk note Investments and investments, especially in crypto-currencies, are always associated with risk. The total loss of the invested capital cannot be excluded. Crypto-currencies are very volatile and can therefore be subject to extreme exchange rate fluctuations within a short period of time. * Originally published in German at CVJ.ch
Tags: Bitcoin, Crypto

InCore and inacta Enable Easy Access to Crypto-assets for Banks