crypto-valley-journal 2019-12-23
0 Comments
We saw an eventful year, with investment growth in the crypto-currency sector as well as in trading. There were also some important macro moments that have motivated Bitcoin traders in 2019. A review and outlook by Patrick Heusser.    Bitcoin: Trading review 2019 and outlook 2020 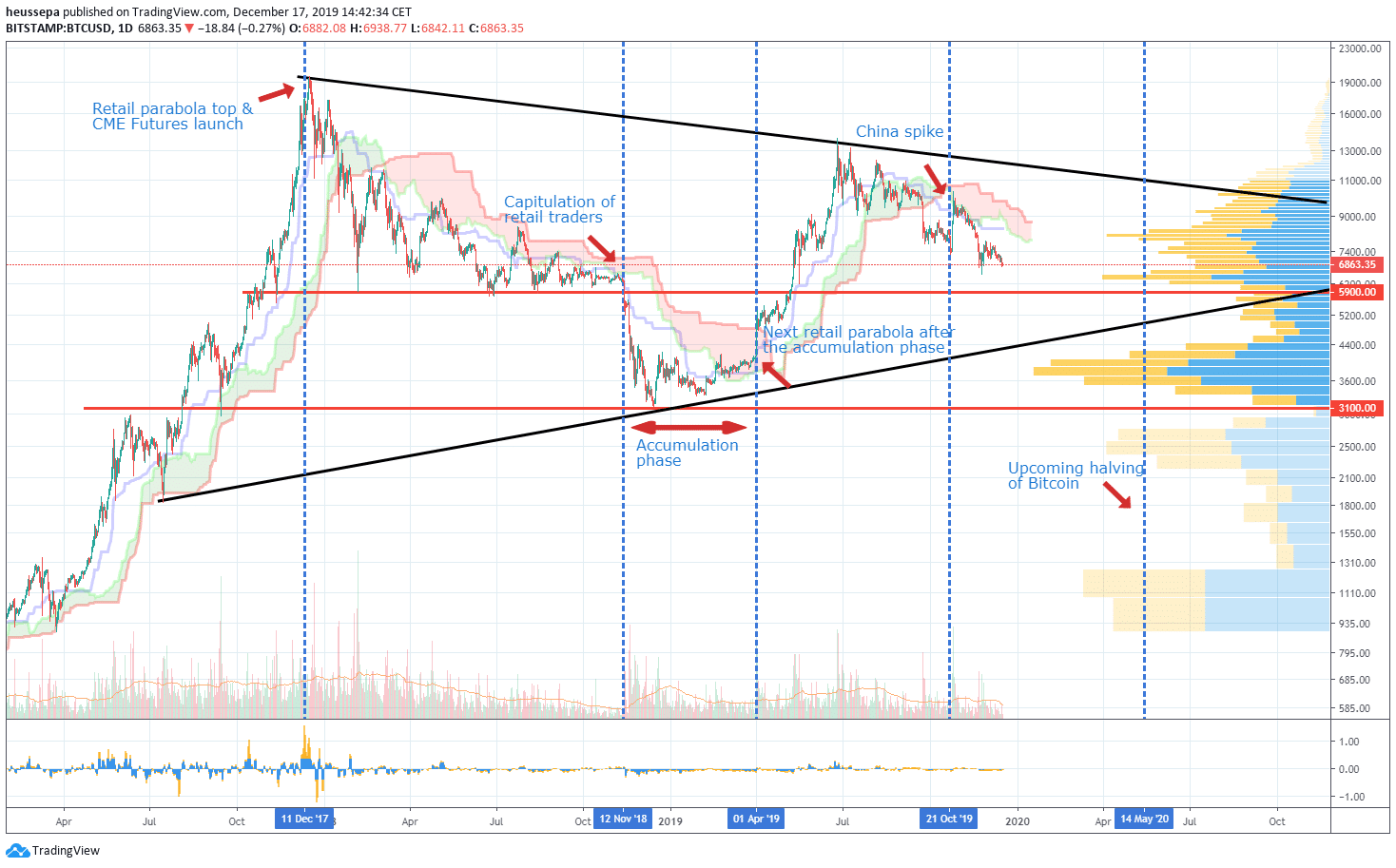 If one looks at the market as a whole, as is done in the 3-year Bitcoin Chart above, one has a good point of reference when looking back to 2019; with a first glimpse of the market in 2020 also possible to discern. In our view, the Bitcoin run that peaked $20,000 was driven by two main events. One was the last halving, which took place on July 11, 2016, when the block charge was halved from 25 to 12.5 Bitcoin. The second was subject to the retail hype and inefficiency of the market infrastructure. These two main factors led to the “Retail Parabola Top” that we saw in December 2017.  Looking back: Start of the professional derivatives market in 2018  In the following 12 months, traders experienced increased price volatility with intraday fluctuations in the double-digit percentage range. While retail traders were busy trying to figure out how to survive the wild ride, some derivative platforms quietly gained traction and began to attract more experienced traders. Topping this list are the CME (Chicago Mercantile Exchange) and Cboe (Chicago Board Options Exchange). However, more volume was traded through exchanges such as BitMEX, Bitflyer and OKEx. These platforms allowed bitcoin owners to hedge their positions without having to physically sell them. This opened the door for speculators, with the possibility to bet against higher Bitcoin prices possible. We believe that these factors have dampened bitcoins parabolic rise. As a result, late retail traders, whose positions were worsening, wanted to sell their bitcoins. This led to an erratic price action with a general downward trend. As a result, the volatility decreased to such an extent that a larger price movement in November 2018 was inevitable.  Crypto-Winter Era  We called this movement the “surrender of the miners and retail traders”. It was fierce and was accompanied by a considerable volume on the physical and derivative exchanges. It took the market almost 5 months to reorganize itself and make another attempt to move up. This accumulation phase was known throughout the blockchain and crypto trading industry as  the “Crypto-Winter”.

Review “Plus Token” Fraud  The next rise was also parabolic. Rumors of a massive scam called the “Plus Token” were circulating. Various independent reporters and analysts concluded that Plus Token had collected a total of $3 billion, much of it through BTC, ETH and EOS. The reporters spoke of a pyramid scheme that deliberately targeted people who had no experience or knowledge of crypto assets. Consequently, it would be consistent with the theory that one of the triggers for this parabolic price movement was actually driven by the Plus Token fraud.  The peak of this movement came at around $14,000 which befitted this theory very well, as the peak  was reached in late June 2019, coinciding with the arrest of 6 suspects fleeing from the Chinese authorities. Subsequently, a large part of these BTC, ETH and EOS were transferred from the Plus Token Wallets to various stock exchanges. We suspect that there were still some fraudsters on the run who had access to the private keys. They were now desperately trying to sell the collected Bitcoins in large quantities on the market. Part of this oversupply caused the price to correct itself towards the $9,500 mark. The market threw in the towel on September 24 when the support level of $9,500 dropped. On that day BitMEX had the largest 24-hour sales liquidation volume in 2019 – almost $650 million. 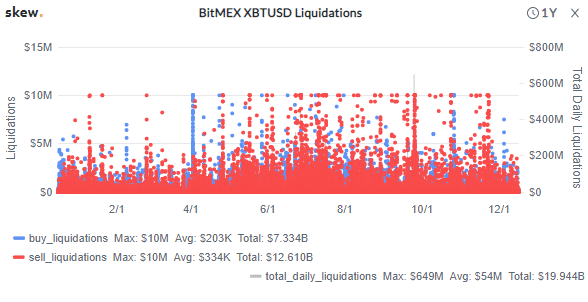 China’s Blockchain Strategy  Just one month later, on 26 October, this trend was completely reversed by the so-called “China Spike”. The volume of this spike occurred over 36 hours and was even higher than during the downward movement on September 24, 2019; which was triggered by the misinterpreted comments of Chinese party leader Xi Jinping. The price moved by more than 30% in less than 24 hours, one of the largest single day rises in Bitcoin’s history. Although the market quickly realized that Xi Jinping was not pushing any crypto-currencies, it took a little longer to correct the overall upward movement.  Despite these aggressive price movements, there have been further product developments. The options platform Deribit now processes a large part of all Bitcoin and Ethereum options in the market and supports the development of structured products by providing liquidity in the options markets. Larger OTC desks with sufficiently high balance sheet totals drove the structuring of the securities and created an attractive investment opportunity for institutional investors from the future offer of miners.  “Staking”  In the last quarter, “staking” was the hot topic concerning the different types of crypto assets. The coins, which work according to the PoS concept (proof of stake), had a considerable run at the end of the year. Please have a look at our Messari-Screen: click here  The YTD (year-to-date) development of the most important coins does not show a nice picture. We see Bitcoin and Litecoin with a positive performance, followed by Binance Coin, Tezos and Chainlink – all PoS Coins – which all showed an excellent performance. The rest developed in a restrained fashion. See our Messari screen for more details: Click here  Outlook for 2020  The most important macro event for Bitcoin is the halving in May 2020, with current forecasts believing the 14 May to be the exact date of when the halving will occur  (https://www.bitcoinblockhalf.com/). From a market perspective, the exact date is not really important. However, on the whole it is a significant event for macro traders and investors. The block reward will halve from 12.5 to 6.25 bitcoins per block. This is an aggressive change in the supply and demand balance.  But don’t be fooled: The price will not automatically go up after a reduction in supply. There must still be a corresponding demand for the price to actually increase. It is interesting to note that Bitcoin’s inflation rate will be lower than that of the most developed countries in the world. Bitcoin is currently at about 3.6% inflation, which will be halved to 1.8% after the Halving Event. According to the World Bank database, Bitcoin will join the countries with low inflation, i.e. Switzerland, Singapore, Germany, France and other  countries with similar inflation rates. 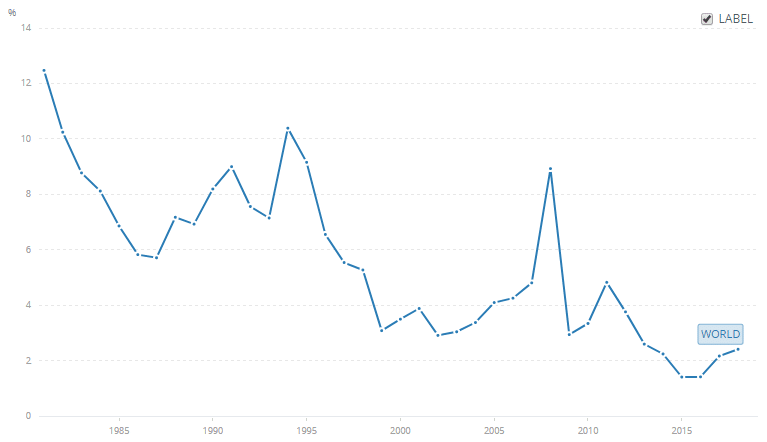 Furthermore, there is no central authority that can influence the value of one’s assets by simply “printing” more fiat money. Although institutional acceptance and adoption has taken much longer than most of the early investors and entrepreneurs in this sector had hoped for, the sector is constantly evolving and finding more applications and new technological developments. On the investment adoption side, we have in Fidelity, a very large asset manager who has dared to include certain crypto assets in their offering. For example, we know from public tweets that Fidelity are looking into the possibility of including Bitcoin in the 401k plan (US pension plan). The concept of blockchain and some crypto currencies are definitely there to stay.   Institutional adaptation and growth in the derivatives market  As institutional adaptation progresses, we expect the derivatives market to continue to grow. Especially on the structured products side. In our opinion, this will be driven by the global markets and their respective low or negative returns. Innovative Fintech banks or clever traditional finance companies will win the race for the “investable Fiat”, which is desperately seeking returns.  Digital Central Bank Currencies and Stablecoins  Central banks have been dealing with the issue of CBDC (central bank digital currency) or DC/EP (digital currency/electronic payments) for some time. In retrospect, we do not believe that these developments really overlap with decentralized crypto-currencies. Central banks operate in the private blockchain sector and have a greater focus on electronic payments. Moreover, if cash (banknotes and coins) disappears, citizens lose even more privacy. A rather positive development that is linked to this nature of central bank involvement are the central banks’ stablecoins; which could lead to a possible reduction in the dependence of global financial markets on the US dollar (see Bank of England Mark Carney’s Jackson Hole speech: Click here).  Regarding the Year 2020 outlook, we believe that there are more signs of a positive price trend than a negative one.  * Originally published in German at CVJ.ch
Tags: Bitcoin, Crypto

What are Parachains in the Polkadot Ecosystem?

Blockchain Interoperability: Towards a Connected Future