crypto-valley-journal 2019-11-20
0 Comments
In the coming decades, the so-called “Millennials” are set to become the most prosperous generation in history. For banks, this could be a cause for concern, as younger generations prefer to shift to unconventional banking and non-third-party means of finance.     Millennials set to become the richest generation in history   By definition, millennials are people born between 1981 and 1996, thus aged between 23 and 38 years old. The U.S. Census Bureau forecasts that the Millennials will be the richest generation in history, ahead of the baby boomers. The baby boomers have experienced record economic expansion over their lifetime’s and will pass on their accumulated wealth to their children.  A study by Fundstrat predicts that disposable income for millennials will grow to over $7 trillion within the next decade and by 2030 millenials are predicted to own five times the amount of wealth as they do at present. 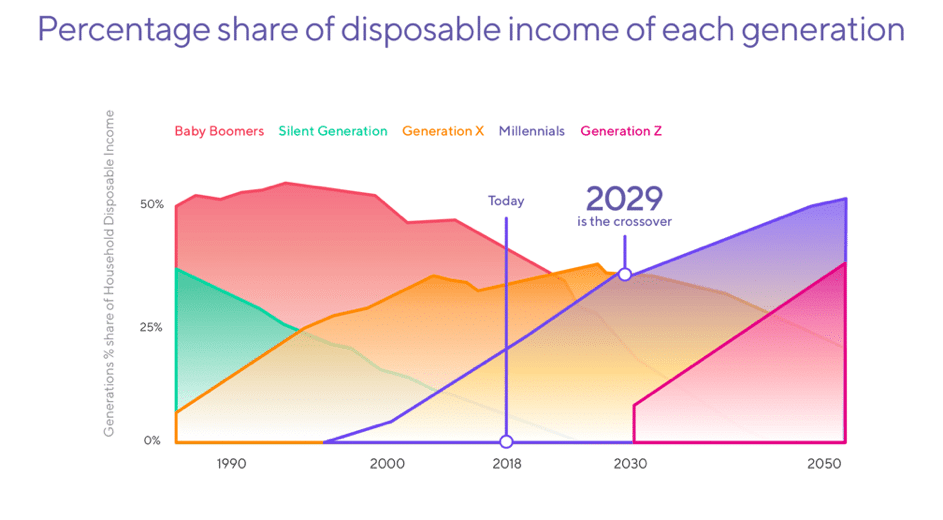 The exciting question about this scenario is: what will the Millennials do with this wealth? There are two possibilities: Spend the money or save it. According to the Millennial Disruption Index, a 3-year study of 10,000 millennials found that they are very distrustful of banks. In the study, 71% of respondents said they would rather go to the dentist than listen to advice offered to them by the banks.  Global financial crisis in 2008 has shaken confidence  The global financial crisis of 2008 has certainly contributed to this existing mistrust. It can be seen as a wake-up call for the millennials. In the USA alone, around 13 trillion dollars in household assets have disappeared in the aftermath of  the financial crisis, eleven million people have had to vacate their homes and a further nine million Americans have lost their jobs. Furthermore, a Harvard study found that only 14% of millennials trust Wall Street to “do the right thing” all or most of the time.Conversely,  83% of Americans believe that Wall Street is no more ethical than it was in 2008.  In light of these events, many millennials are thinking about alternative forms of asset custody. Around 68% of millennials would at least consider ending their relationship with the traditional banking system  and switching to a digital bank run by a technology company (Facebook, Google, Apple, Amazon…). Among the baby boomers, only 32% are willing to consider this step.   Interest in crypto-currencies at Millennials is high  Due to the existing mistrust of traditional banks, digital assets are becoming an increasingly attractive option  to the younger generations. A quarter of the American millennials, who are between 24 and 38 years old and earn $100,000 in individual or collective income, hold and use crypto-currencies.  Another 31% are interested in using crypto-currencies. A study by the company “Blockchain Capital” found that about 9% of the population owns bitcoin – for 18-34 year olds, the percentage of individuals holding bitcoin is 18%. 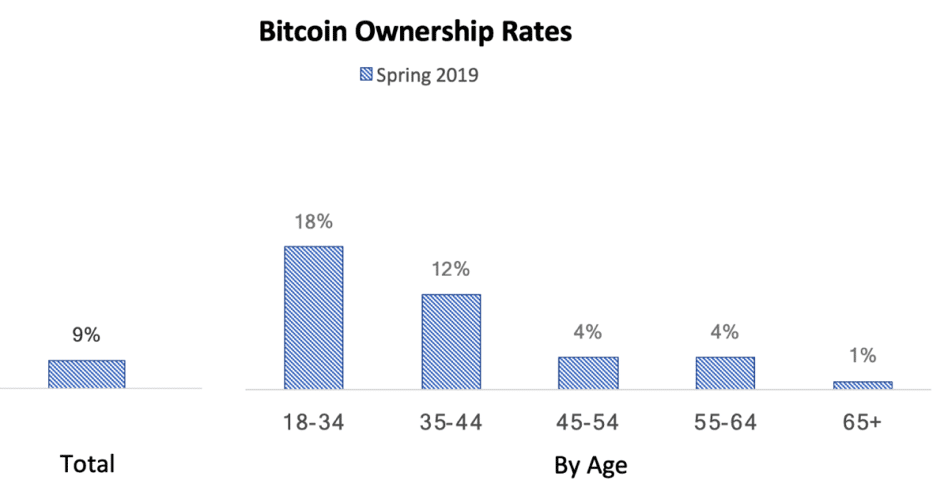 Another important point is the internet affinity of millennials. The majority of the millennials grew up with both the fixed network and the smartphone. The ability to access any information online has shaped the entire generation.  Millennials usually have already made contact in games with virtual currencies  The millennials will continue to transform the economy. A good example of this movement is e-sports, which are increasingly preferred to traditional sports by younger generations. These games often use virtual currencies, which allow players to exchange real money for “game money”; with popular games making  billions in turn over by selling in-game “virtual currency”. Effectively, bitcoin and cryptocurrencies in general could become beneficiaries of the “Great Wealth Transfer”.  This step from virtual currency to crypto currency is smaller than one might think. Bitcoin also has many intrinsic features that the younger generations have become more accustomed to. For example, downloading a wallet and buying digital currencies is faster than opening and handling a bank account during bank opening hours. Millennials are inceasingly expecting on-demand services to be provided with a simple click on a buttom,  with restrictions, regulations and bureaucratic process reduced to a bare minimum. Thus,  millennials could and are embracing the digital age with open arms, while evermore frequently turning their backs on the traditional financial system.  * Originally published in German at CVJ.ch
Tags: Digital Currencies, Forecasts, Insights, Markets

Essential things to know about the Crypto World

Back to Basics Webinar Summary