Below is a walkthrough of a simple strategy script for MachinaTrader.

It is standard C# language and is composed of 4 key areas which will be discussed below:

The above script highlights the basic parts that are required in a MachinaTrader strategy.

They are detailed individually in the following sections.

The base import part is the same for all strategies and can be copied from an existing strategy / sample.

The area enables developers to import and use more C# libraries. Basically the whole .NET framework is available which provides unlimited freedom even for the most complex strategies.

The Parameters area is optional but in most cases, a strategy developer will want to expose some settings to the end-user and once defined as Parameters, they are automatically displayed in the user interface and can be modified by the user prior to executing a backtest or running a strategy.

Parameters are defined as public properties in the script and marked with a parameter decorator.

In the example below, we have 2 parameters SMA Fast and SMA Slow.

Machina Engine offers three types of parameters, and they are always declared as follows:

The Parameter property defines a user-friendly name for the setting which will be displayed in the user interface.

The above example exposes the following parameters to the user: 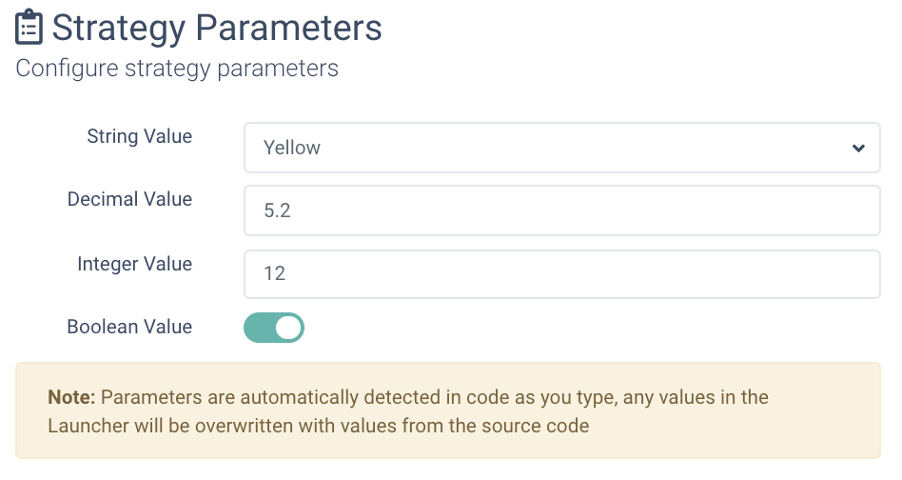 The defined variables for the parameters are public, meaning that once declared they can be used from anywhere in the strategy code, generally in the OnTradeBar method.

Numeric parameters are defined using the int or double type and enable the user to provide a numeric value that will affect a strategy before backtesting and running it live.

Boolean parameters is the simplest form of parameters and let the user enable or disable a functionality. They have only 2 states (True and False) and are represented in the user interface by a switch.

String parameters are letting the user select between various options.

The options are separated by a , character and the default option is decorated by a starting and a leading * character (making Yellow the default). This will allow the user to select one of the values from a drop-down list before executing a backtest or a strategy.

Note: every time a change is done to the code, the parameters in the user interface will get reset to their default value.

When running a strategy for backtesting or live trading, there is an initialization phase. On the scripting side this results in having the Initialize method being fired.

There isn't much code in there and the most important part is about telling the engine how many historical candles should be returned at each tick / new candle.

This can be changed / overridden in the Initialize method if needed.

For instance if we always want 24 hours of candles to be returned you can change this code by the following:

Here, we are forcing the engine to always return last 24 hours of candles history each time a new candle is provided and this will apply to every interval.

This is the interesting part of a strategy and where all the trading logic and rules is going to take place.

Every time a new candle is available (for instance every 15 minutes), the OnTradeBar method is fired. This method will provide a Slice which consists of the new/latest candle as well as all the the historical candles for the period defined in the Intitalization part.

The base structure below should always be present:

From this point, you can start using the history to calculate values using Technical Indicators and to take trading decisions to place buy or sell orders.

While writing strategies, you also need to have access to the wallet / portfolio to know in which position the execution stands and how much Base and Quote is available for trading.

You have the following objects available at any time inside the OnTradeBar method which return this information:

One of the key goals of an automated strategy is to place orders based on decisions / rules / trading logic.

In the MachinaEngine you can use either LIMIT or MARKET orders in both directions (BUY or SELL).

The easiest way is to place Market orders because they will be executed directly at market price.

This is achieved using the Buy or Sell methods.

There is a helper method called CalculateTrades which can be used to calculate the amount of Base / Quote which can be bought or sold based on the current portfolio.

The signature of this method is as follows:

It requires knowing the symbol that we are targeting, the direction (Buy or Sell) and optionally the price (if the price is null a Market Order will be assumed).

The following examples illustrates how to place Market Buy or Sell Orders with the maximum amount available in the wallet.

The Sell method which is a straight-forward helper and doesn?t even require the use of CalculateTrade. Just indicate the symbol and the amount of assets to be sold and it will be executed as a Market Order.

In this context, we can use another helper PercentBelow to automatically use the ticker price minus 0.5% in this example:

Accessing the currently opened (not filled) Limit Orders can be achieved using the following code:

While developing a strategy and to monitor what it does during execution, it is useful to be able to output some logs. The MachinaTrader engine offers this functionality through the Log method.

Log method is straight-forward since it takes only one parameter which is the text/information to be logged. The timestamp will be applied automatically (execution timestamp).

During and after the execution of the strategy, the logs are reported in the user interface under the Logs tab.

The ability to render indicators and information on the chart really helps while developing strategies and for users to understand when to expect signals.

For this purpose we can use the Plotter method which has the following signature:

To use it we need to provide the following parameters:

To render two custom series on the main chart, for instance a Fast and a Slow Moving average, the following code can be used:

The above code would provide this result on the chart: 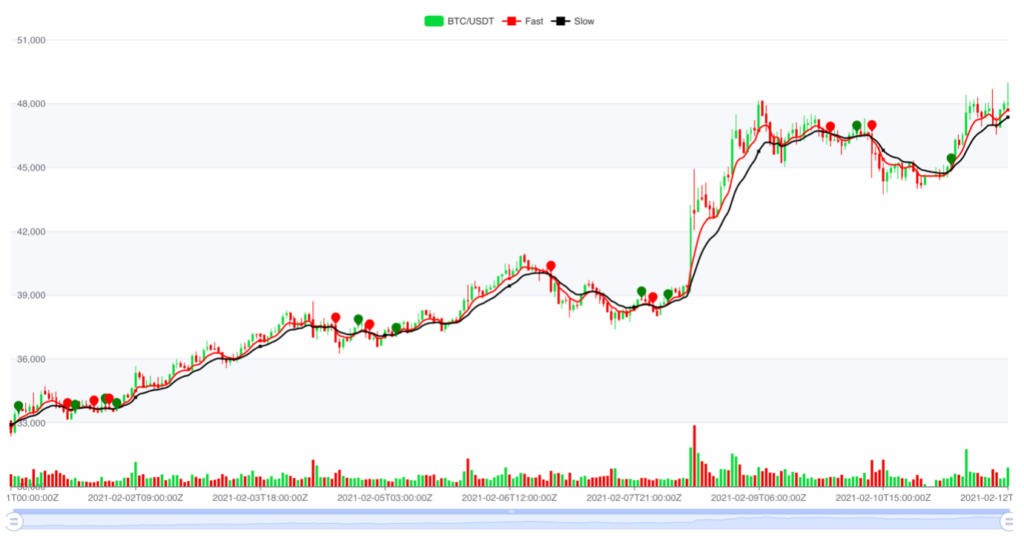 Some indicators or information are not using values based on the price (such as RSI, MFI, etc.) and therefore should not be rendered on the main chart, in this case it?s better to request a dedicated chart and have it plotted separately.

This can be achieved with the requiresOwnChart parameter set to true as shown here:

As a result, we have our RSI being rendered below the main chart instead of over it as shown on the following screenshot. 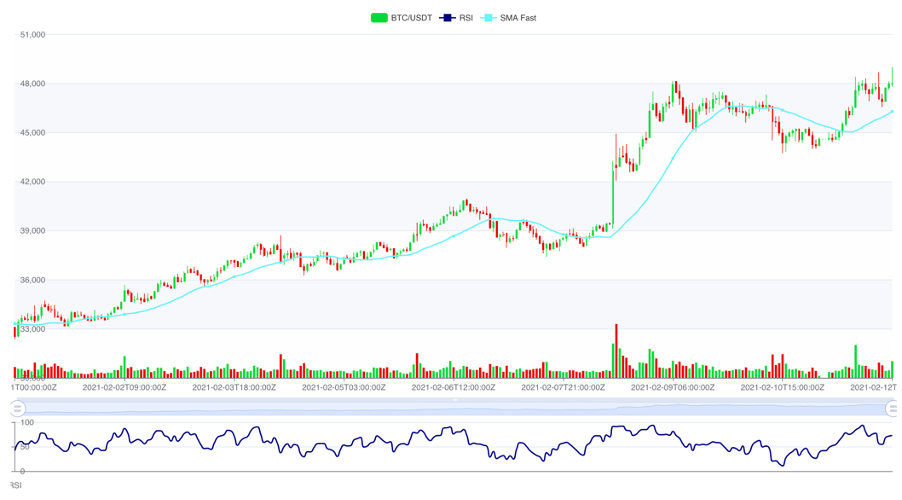 Since there are many variations and possibilities, there are the available options for the different types of charts and lines.

Please note that the main chart is a Line-Type chart, therefore to use all the other types (Bars, etc.), it is required to create a new Group and request a Dedicated Chart (requiresOwnChart = true).