crypto-valley-journal 2020-01-17
0 Comments
The recently observed price increases in bitcoin have caused the search volume on Google to rise. According to statistics on Google Trends, this pattern of bitcoin price increases correlating with increased search volumes, has been observed frequently in the past. But there are also other findings. Google Trends is an online service provided by Google LLC, which provides information on which search terms are searched for by individuals using the Google search engine. The results are in relation to the total search volume and have been available on a weekly basis around the world since the beginning of 2004. With the help of Google Trends, the popularity of individual terms can be analyzed over time, which allows conclusions to be drawn about emerging trends in society. Due to the recent price increase, the interest in Google for the search term “bitcoin” has also increased again. With Google Trends, search queries can be mapped over time, which can reflect the interest in a particular good.

Total search volume according to Bitcoin at Google Trends shows close correlation to price If one observes the chronological searches of Google Trends, one can quickly see that the interest in bitcoin was the highest in December 2017. This can be explained by the rapid price increases just before the all-time high, which at that point was just under $20,000. The price increase has also generated more media coverage, which has resulted in additional search questions being looked-up. Just after the all-time high was reached, the search volume for bitcoin also decreased steadily and the gold-rush atmosphere evaporated at the same time. After bitcoin had reached its all-time high, the interest, similar to the price, collapsed again. When the price reached its lowest point at the end of December 2018 at around $3,000, the search volume for the digital currency also became negligible. With the rise in the price to $14,000 in June 2019, search queries have thus also grown again. This clearly indicates how strongly the price of bitcoin correlates with the searchers made for it. With the recent price increase, the search trend has also increased again slightly. Local search queries are independent of price – “Bitcoin Iran” reaches peak While a large proportion of simple “bitcoin” search queries follow price fluctuations, thus have a short-term speculative nature, search queries made during times of political uncertainty take place as well. An impressive example of how clearly Google Trends reflect current affairs can be seen in the search for “bitcoin Iran”. Following the recent confrontations between the USA and Iran, the search volume for this word pair has gone viral. The occurrence of this particular search instance is unequivocally due to the tensions between the two nations. Effectively, this phenomenon indicates that bitcoin represents a safe “store of value” in the face of geopolitical risk and civil unrest.

Growing interest in bitcoin in crisis-ridden countries Increasing interest in bitcoin can also be observed in countries that are experiencing a financial crisis. In Venezuela, a country suffering under an inflation rate and loss in fiat currency trust that can be likened to the Weimar republic, the interest in bitcoin is apparent. Accordingly, the search volume for bitcoin has risen continuously over the last 12 months – regardless of the bitcoin price. This shows that the population in crisis-ridden countries are looking at bitcoin as an alternative store of value when fiat fails. In Iran, Venezuela, as well as in many countries on the African continent, the increase in search results for bitcoin are backed by exchange statistics. This development can be seen in the statistics of local exchange platforms housing “local bitcoins”. 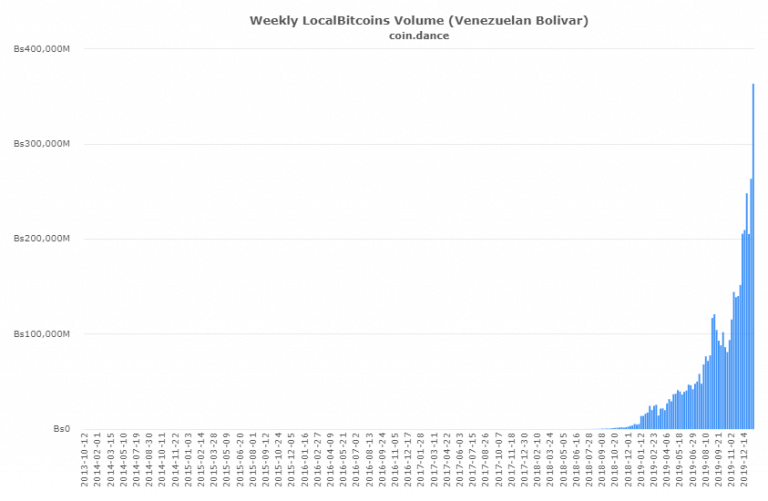 (Source: Search-request on Google Trends, “Bitcoin in Venezuela”) The ongoing crisis in Venezuela has caused the price of the Venezuelan bolivar (VEF) to fall. The Central Bank of Venezuela estimates inflation rates between 2016 and 2019 have escalated over 53.7 million percent. One could therefore argue that bitcoin is mainly regarded as an object of speculation in economically stable and affluent countries. Conversely, in crisis-ridden countries, ravaged by hyperinflation or political uncertainty, bitcoin replaces and fulfills the most basic functions promised by fiat currencies. Bitcoin is as a store of value, that can protect citizens against the collapse of fiat currencies as a result of government recklessness, incompetence and corruption. * Originally published in German at CVJ.ch
Tags: Bitcoin, Crypto