crypto-valley-journal 2019-10-16
0 Comments
Bitcoin is undoubtedly becoming more popular. While many people have heard of bitcoin, the percentage of the world’s population that owns bitcoin is still negligible. In the following article, a two-pronged interpretation regarding the distribution of bitcoin will be presented. The first part will focus on total quantity and distribution.   Total quantity: Limited maximum number and inflation rate  Bitcoin as a digital currency has predefined limits on the supply side. The maximum number of bitcoins anchored in the code is limited to 21 million.  The current total quantity is roughly 18 million coins. Newly created bitcoins are distributed to the miners as a payment. The miners, by engaging in the act of mining, contribute computing power to ensure the functionality of the blockchain system. Currently, 12.5 newly created bitcoins are transferred to miners for newly calculated blocks. This happens every 10 minutes. Thus the current inflation rate can be calculated, which currently sits at 3.7% per year. Furthermore, the payment to the miners is halved every 4 years and thus 98% of the maximum number of bitcoins will already have been created by 2030. In 2140 the last block payments should be paid out to the miners. After that, Miners will only earn on the transaction costs that they have to pay for the transfer of Bitcoins. 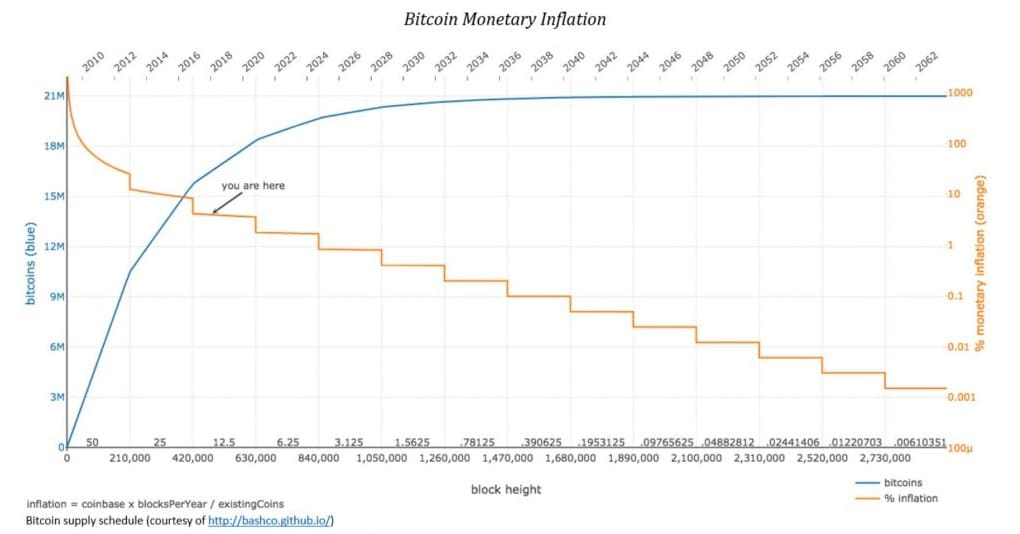 Distribution: Wallet addresses and their stock

Wallet addresses give a vague indication of the number of users and the distribution of bitcoins. It is difficult to derive the number of users directly from the number of wallet addresses. For example, common wallet properties that generate multiple bitcoin addresses, as well as users holding crypto-currencies via stock exchange providers make the analysis difficult.  In the second part of this article, more detail will be shed on the analysis. For now, the focus will be on the number of addresses and their content.   According to Statista, a total of over 42 million Bitcoin Wallets had been set up by the end of the third quarter of 2019. This number is also reflected on blockchain.com. The chart shows a steady increase over the last three years from almost 9 million wallet addresses in Q3 2016 to a good 42 million addresses in Q3 2019. The number of wallet addresses has thus grown by an average of 155% over the last three years. 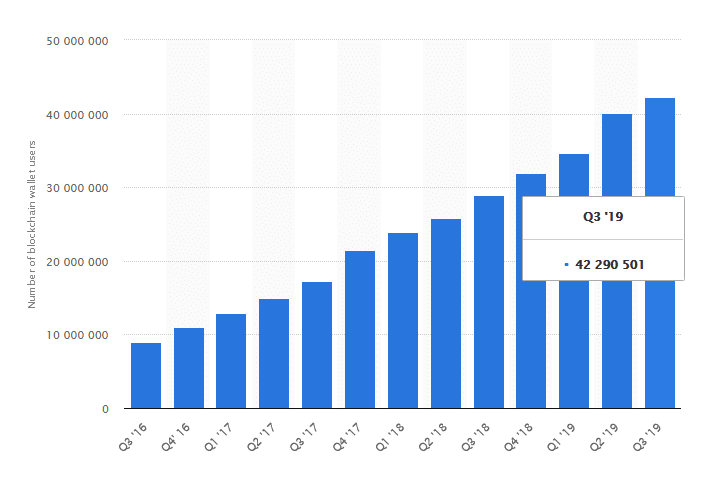 While the majority of addresses hold roughly between 1 and 100 USD worth of bitcoin, addresses with a value of 100 – 10,000 USD are still very well represented with just over 9 million addresses. In the upper segment, the distribution is expected to be thinner. 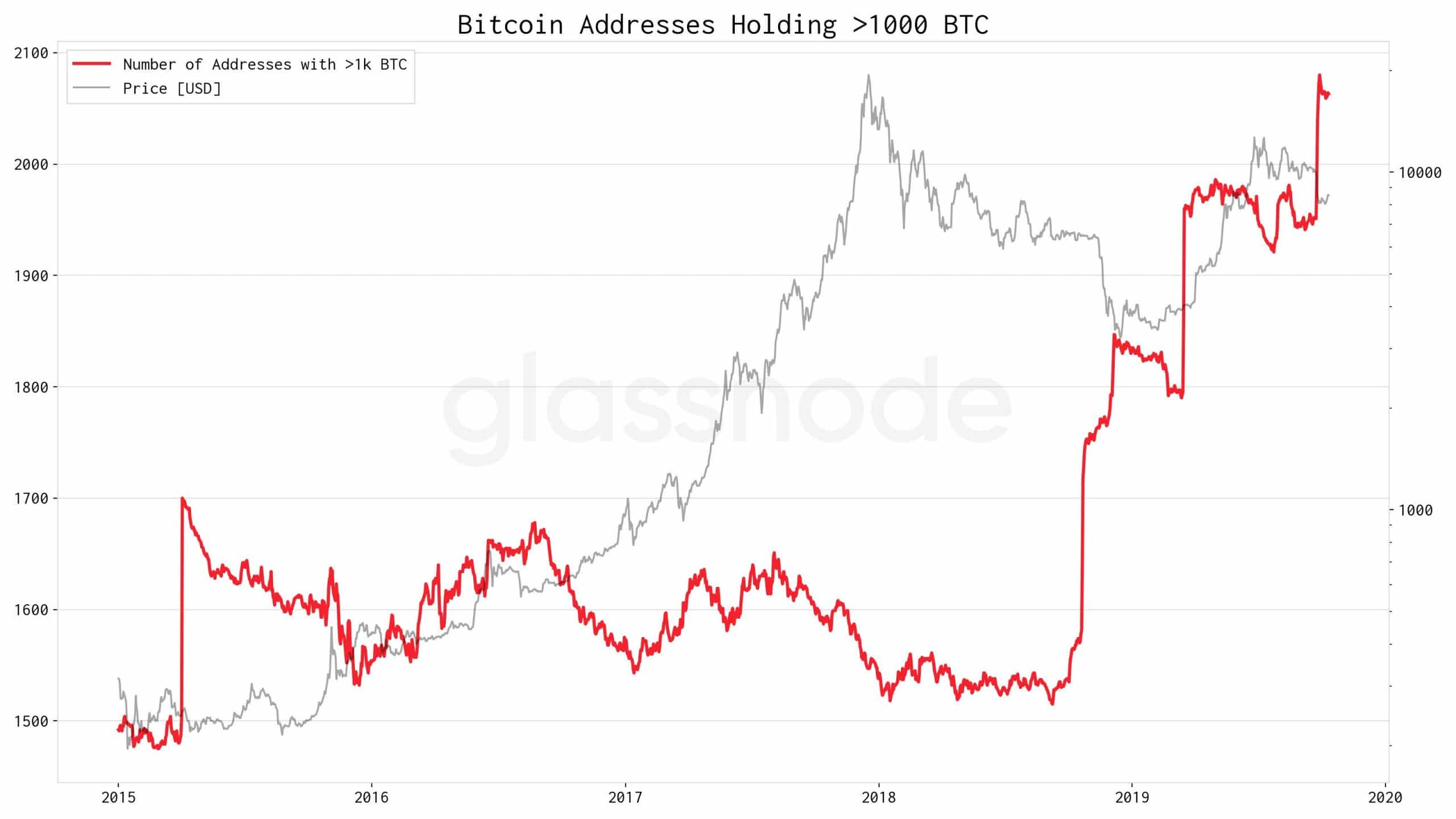 The wallet segment with holdings of more than 1,000 Bitcoins has recorded strong percentage growth since the end of 2018. The 1341 addresses with a value of more than USD 10 million are often attributed to cold storage wallets of stock exchanges. Additionally, the segment of lost bitcoins is also represented in this group.  Up to 20% “lost” Bitcoins  A considerable number of bitcoins, have been located in the same wallet addresses for years. A large part of this share can be considered lost. A study by Delphi Digital specifically analyzed the “Unspent Transaction Output (UTXO)”data. For each output of BTC, a new UTXO entry is generated. From this it can be deduced how long bitcoins have been lying in the same wallet address. Bitcoins that have not been moved for more than 5 years have a high chance that the owners have lost access to their private keys and thus the ability to sell their bitcoins. It is also possible that they have already passed away. According to the analysis, up to 4 million bitcoins could thus be “locked away” forever. A significant proportion of these, over 980,000 bitcoins, have been stored on wallet addresses assigned to Satoshi Nakomoto since the beginning.   Conclusion  The total amount of bitcoins available is smaller than one might expect at first glance due to “lost” bitcoins. The inflation rate is decreasing according to the specified bitcoin protocol. As. Mentioned above, it currently amounts to 3.7%. The remuneration in the form of newly created bitcoins to the miners is halved every four years. Already next year, the distribution to the miners will be halved again.   Although the distribution of bitcoins wallet addresses still shows a strong concentration on amounts below USD 100, the almost 130,000 wallet addresses which hold values between USD 100,000 and USD 1 million worth of bitcoins cannot be negated in proportion. The growth rate of newly created wallet addresses is at a sustainable 155% p.a. over the last 3 years. The segment with holdings of more than 1000 Bitcoins is also showing strong growth. Due to the structure of the bitcoin network, there is hardly any data on the geographical distribution of wallet addresses. The majority of wallet addresses are likely to be created in the ecosystem around the largest trading centers.  In our second part to this topic, we will look at the users in the bitcoin network. Who is behind the wallet addresses and what are the intentions of the Bitcoin owners? * Originally published in German at CVJ.ch
Tags: Bitcoin, Coins, Essentials, Trading

Essential things to know about the Crypto World

Webinar August 27 – All about Bitcoin